The way we came upon constructing our first Lift and Slide door, as well as our first Slide and Fold window was by curious happenstance.

A contractor was building an adobe home that took advantage of the desert topography near the outdoors mecca of Moab, Utah. His client was an architect, and she had situated her home perpendicular to airflows that descended from the nearby La Sal Mountains, so the house could be passively cooled. By building thick adobe walls, she had ensured a high degree of thermal performance to help keep the home cool in the summer and warm in the winter.

The house had two large openings in walls across from each other. At night, the opposing sides of the house could be opened through large windows or doors. The cool air descending from the La Sal’s would draw the daytime air out of the building, being replaced by cool fresh air.

People familiar with this environment know how significantly a desert will cool off at night, because there are few natural obstacles to retain the day’s heat. Cool air is heavier than warm, and when the sun ceases to warm the earth, the heavier cold air from higher elevations slides down to the desert floor, displacing heat.

Here was a need for some form of window or door that created large openings, yet could seal tight against the high desert winters. In short, this house required openings that could bring the out of doors to the inside. The architect had seen the Lift and Slide door, and Slide and Fold window systems in Europe, and felt that either of these, or one of each would suit her purpose well.

Applying some research, she came upon the German hardware company GU, from whom we purchase our hardware today. GU was able to supply her the necessary hardware to build the two systems, the Lift and Slide, and the Slide and Fold, if she could find a door maker that could build the doors and windows, as well as assemble the hardware into them. 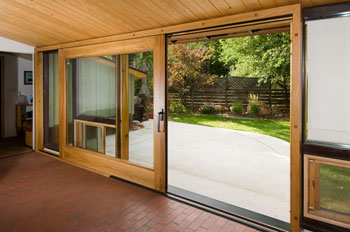 She met with a local door maker, who agreed to take on the project. However, it was an unrealistic expectation to ask someone to build such complex systems without previous experience. The packages of hardware arrived at his shop, ready for assembly into functional doors. A calendar year went by, and the only progress made was the shop had managed to mix the parts from the two distinct systems into one big box, before realizing the impossibility in completing the project.

My builder friend knew about our company, and that we were making extraordinary European style entry doors, and introduced me to the project. Little did I know the challenge that was now ours. I met with the architect, and agreed to do the job.

The large box arrived containing the dozens of mixed up parts. I also received shipment of the track and guide rails, as well as a myriad of gaskets, small specific parts, screws, and partially disassembled parts, with no idea of what any of it was. If I have any asset to my personality, it is that I don’t give in easily. I am as stubborn as a mule, and about as smart. I am not exceptionally talented at any thing, but I do have tenacity. Tenacity was what this project was going to take. 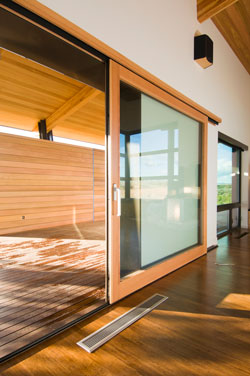 I began by contacting the hardware company GU (Gretsch-Unitas), one of the world’s top suppliers of door and window hardware. GU has a distributorship in North America, and friendly representatives. Soon I was working with a patient fellow who over the course of a month, many emails, phone calls, photos and drawings, helped me separate the heap of hardware into two distinct window and door systems.

Once I had the hardware sorted out, I had to learn the function and place of each piece. Inadvertently, I was receiving in-depth training in the manufacture of Lift and Slides and Slide and Folds. It was the most challenging project of my career. I didn’t have the correct tooling for the job, and had to improvise extensively with the machinery and tooling that I owned. Fortunately the tolerances in the two systems are measured in fractions of millimeters, which were familiar to us from our furniture making experience.

I persevered, and (hundreds of hours and eight weeks later) emerged victorious. I had created the two new systems, they worked well, and were ready to install. Our team traveled to Moab with the two large systems in tow, and completed the install.
The Lift and Slide door was put into the uphill side of the house, whereas the slide and fold window ran along the top of a bar on the downhill side.

The door and window had the desired effect: In the evening, when both sets were open, the cool air wafted through the house, cooling the building passively. In the morning, the two systems were closed, sealing in the naturally conditioned air. The thermal value of the adobe home then keeps the temperature cool well into the afternoon. 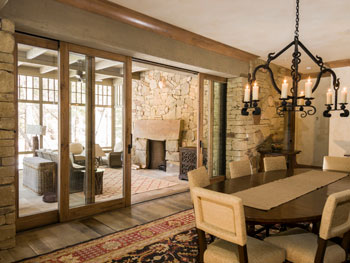 In the winter, the systems functioned differently. During the day, the big expanses of glass collected warmth from the sun, which heated dark tiles and a concrete slab in the floor. In the evening this thermal mass released the heat from the day, helping to warm the building.

The project was a complete success, while the desert adobe building performed quietly and passively day after day, year after year.

From that time forward, we developed a product that could similarly help people bring the out of doors inside. We committed to the manufacture of these systems by purchasing the necessary tooling and machinery to build them well, and to build them efficiently.

We decided to add a powder coat aluminum cladding component to the Lift/ Slide and Slide/ Fold doors to better repel the relentless sun of the Southwest. We have a local metal working shop fabricate the cladding shapes to our specifications, and then have those shapes powder coated in the colors of our clients’ choice. 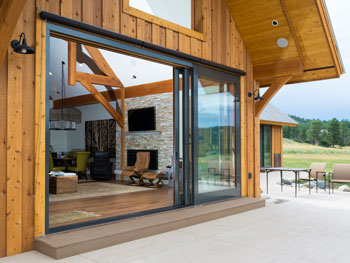 We know from experience with other Lift and Slide companies, ours compare very favorably, and are probably better thought through than most. Ours are what is termed by the industry as the “heavy duty” or “ultimate” versions, which are a full 2.75” thick, with all the best hardware components and thermal properties.

Not infrequently we are asked to either repair or troubleshoot a system made by another company, because of some failure in either the manufacture, or installation. I almost always agree to provide these services, because we get a chance to see how other companies are making their Slide Doors, and thereby learn more about how to improve our own systems.

One time we were asked to install a twelve feet tall by twenty feet wide Lift and Slide system made by one of the nation’s top Lift and Slide manufacturers. This manufacturer used identical hardware as we do, so we were well suited to complete the installation. I was impressed by some of the installation aids, such as quick leveling screws, and good instructions. But I was shocked at the low quality of the door panels themselves.

Neither the doors, nor the threshold or header had any thermal advantages built in. The threshold was a solid concrete pour with no thermal breaks, bringing all the cold of the outdoors directly inside underneath the door. The structure of the door panels was extruded aluminum cladding, with a bit of wood attached to the inside to give the appearance of a wooden door. They seemed to be designed for a tropical climate, yet they were being sold in Colorado. These doors would be butt cold!

By comparison, we use solid wood laminations with thermal materials throughout our doors to make the warmest doors possible. We are able veneer the doors with any wood species possible, for an integrated look with the rest of the décor. Since our aluminum cladding is a powder coat, it is more durable against sun fading than the commercial anodized metal finish. And unlike many of the commercial lift and slides on the market, we include triple glazing with a non-conductive composite spacer into our systems, which is a huge benefit in these large glass expanses.

The primary reason to use a Lift and Slide, is the ease of use, the higher thermal properties for a sliding door, and often most important of all, to bring the outside in to the home. A beautiful view or a colorful garden becomes an integral part of the home itself, either through the view, or by freeing large openings in an exterior wall.

The fact that these systems glide open almost by themselves doesn’t hurt!

When building these systems anywhere within our delivery range, which are most of the states which neighbor us, we will assemble the complete door and deliver the jamb intact. This can often mean a delivery package that is twenty feet long, and nine feet high. This makes installation at the sight quick and easy. Longer distances require the system to be broken down in components and shipped with detailed assembly instructions.

It cannot be overemphasized how important the installation process is. The function of these doors and windows is entirely dependent upon the accuracy with which they are installed. Keeping the running rails (bottom tracks) level to within a 64th of an inch through the entire length of the system is crucial, and often outside of the skill sets of local installers. On the other hand, we have also frequently found craftsmen everywhere who take exceptional pride in their work, and perform the installations excellently.

A homeowner or builder would have to evaluate the people he had on hand to determine whether or not they had the correct attention to detail. Special tools such as a surveyor’s sight level, and accurate levels are indispensible. Because of the challenge of these installs, our company is usually asked to perform them.

A few more stories involve watching a cat open a large lift and slide, by pushing on the panel with its body. That is how easily these systems move. Another is seeing a four year old girl understand immediately how the Lift and Slide mechanism and levers worked, and to operate the door herself. We have clients that have disabilities that choose these systems for their security and ease of operation.

Screen systems are easy to install, and a good addition to keep insects out. We refer our customers to specific screen companies that support our systems.

To sum up, these doors offer a sophisticated element to any building whether it is residential or commercial, and can also be used as effective partitions within the structure. The architectural enhancement they provide really sets the building apart in a memorable way.