Thirty years ago, inspired by the chair designer and builder Sam Maloof, I began my woodworking career in Durango Colorado. Little did I know where my business would go. I did have some projection of where I would be in 30 years, but I hadn’t thought it would be doors and windows!

I began by idealizing my career. I was born in Munich, Germany, and had lived in Germany until the age of 17. Because of this upbringing, I had been exposed to fine craftsmanship in furniture, cabinetry, doors and windows.

I wanted to build artistic furniture like Sam did. I built a few chairs for practice, learning from his book, and soon came to realize how labor-intensive finely crafted furniture was. Upon my wife’s suggestion, we traveled up to Snowmass, Colorado to visit the Anderson Ranch, an arts and crafts educational institute. At the Ranch, I enrolled in Sam Maloof’s chair making class. Since I had built a couple of his style chairs before attending the class, I was a particularly attentive and comprehending student. I hit it off well with Sam, and he was generous with information as to how his career evolved. Enthused by this experience, I decided that woodworking was calling!

Noteworthy of the trip, in order to save money on not using a hotel, my wife agreed to sleep under a road grader parked up on beautiful Independence Pass. There we spent a comfortable night, dry and warm in sleeping bags, even in a summer deluge. 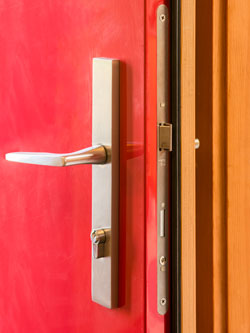 Returning to Durango with renewed zest for the craft, I dove into the furniture making, receiving several commissions for wooden chair and table sets, and other items. I built a variety of things, such as coat racks, desks, magazine stands, card stands, bookcases, nightstand, dressers, headboards and beds, with the occasional cabinetry… and finally my first big commission; all the shelving for a new coffee shop. With the cash flow from this first commercial job, I began to think more in terms of how woodworking could generate income, instead of continuing with the time-consuming, one-of-a-kind pieces that were part of the learning process.

I came upon the idea of building furniture along with cabinetry, as a way of introducing artistic elements into a household. I built cabinetry that was complimented by fine furniture. As my interest grew in this direction, I discovered the designs of Johnny Grey, a creative British kitchen designer. Grey is the founder of the concept, the “unfitted kitchen”. The unfitted kitchen was just what I was interested in: practical kitchens with inspiring craftsmanship, interesting design and freestanding furniture pieces to compliment the final effect.

Along with this direction, came the use of new technology and techniques. An example of new technology was the vacuum veneering press, which allowed for fantastic curved work in both my furniture, and in curved cabinetry. These were crucial learning years that built skills that would later be applied in making high-end doors and windows.

One of my jobs in those early years was to build a timber-framed garden structure, that sheltered an open seating and grilling area. I became acquainted with the beautiful joinery of large timber pieces, again skills that would be later used in large door assemblies. Upon finishing the timber frame, my clients asked if I would make a door for a portion of the structure that we had enclosed.

I thought that making a door shouldn’t be too difficult, given my furniture making and now timber framing experience, so I embarked on my first door. It was made of maple to contrast with the vertical grain Douglas fir of the timber frame. I followed the lines of the American door making tradition, including leaf hinges, and mortise locks, and floor sweeps. I had made my first door, and found them simple in comparison to some of the things I had already done, such as the engineering complexity of making a chair.

And so my career progressed from job to job, all the while working on our own home, building a new sizeable shop, and increasing my market. I began to work in Telluride, an exclusive ski town that is a two hour drive from Durango. Telluride was experiencing a tremendous surge in popularity in the high-end market, with large fine homes going up every day of the year. 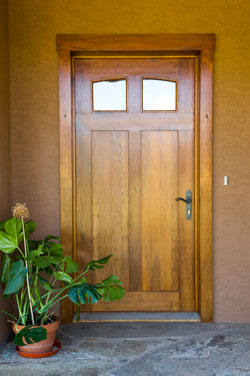 I got in with a good builder and architect, and for a 5 year period served mainly the Telluride market with complete cabinet packages. This also included furniture, and some doors. This period of time was quite lucrative, and we were able to expand our capacity to accommodate large cabinet jobs that filled 10,000 square foot homes and larger. However, I was dissatisfied with the mass production aspect of this period, and craved getting back to the artistic and creative woodwork that I had based my direction on in the beginning. Little did I know that becoming familiar with factory production, however resistant I was to it, would become invaluable later in my career, as I began to mass-produce windows and doors.

The market then was expansive enough, that I was able to inform the builder I worked with in Telluride that I preferred to return to a smaller operation. We would focus on the high-end and artistic kitchen, which meant leaving the large home Telluride market. We spent another ten years primarily in the Durango market again, making some of the nicest kitchens in Colorado. We set ourselves apart by using the best hardware available, which was exclusively European. Thus I became familiar with the precision and delight of European engineering, which would later be used in our doors and windows. My customers enjoyed the durability and function of the best hardware in the world.

About this time, I was involved in the second remodel of our home, and wanted to make our front door. A young Swiss fellow named Matthias was in the neighborhood, and had been helping with some of the remodel construction projects. He was what in Europe is known as a wood engineer. This is a trade where a person is trained in all technical aspects of wood, particularly to be able to use wood in structural applications.

Since I had grown up in Germany, I was familiar with the European style of doors and windows. Having already built quite a few standard doors, I decided that I wanted to try and make a European Style Overlay Entry Door. This is a mouthful, but it actually describes how the door is different. This difference is rather simple in appearance, but in construction, it is rather complex.

The Overlay Door, unlike a standard door, has a wooden ledge that goes around the entire perimeter of the door. This ledge is not visible from either the outside or the inside of a closed door. From either of these two perspectives, the door appears to be usual. However, if you open the door, and see the edge, you will notice the Overlay Edge. 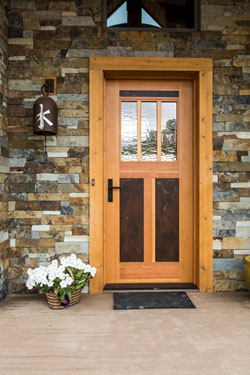 The function of the Edge is two-fold: First, contained within the edge, is a high-quality gasket. Since the rabbet edge goes around the entire door, and that edge closes against the jamb and the threshold, it creates an air-tight seal between the door and the door frame. Secondly, the Overlay Edge is thick so that a barrel hinge is bored into the edge, supporting the weight of the door in the jamb.

The visiting Swiss wood student knew all about this style of door. He helped me figure out and design the technicalities on an overlay edge door. We set out constructing our first European door.

As usual, the task was more difficult than first thought. We began by gluing up core material, to make as stable a door as possible. This first door, I glued up pieces of solid oak, which I laminated together in a tough glue-lam beam. All of the door parts including the jamb were made this way.

This first door, where all parts were laminated pieces, has become the mainstay of how we construct all our doors and windows today. The glue laminations offer incredible stability and strength, and can be covered with solid wood of any species to look like a solid piece of wood, but with all the advantages of an engineered beam.

Then came the determining of tolerances between the overlay edge and latch mechanism, the precise measurements of a strike plate, the correct placement of hinges and levers and the placement of gaskets.

Thanks to Matthias, this first door hangs on my house today, 25 years later, and works as well now as it did when it was put in (a comment we frequently hear).

Since then and over the years, we have refined several elements. We have discovered the right glues to use for optimal performance in different conditions. We have developed the thermal threshold, to mitigate cold penetration to the inside of the door. It was necessary to invent thermal properties inside of our doors to make them warmer and lighter. We have discovered the optimal veneer thickness, to give a solid lumber look and feel, yet with the advantages of glue lamination interiors and we have developed a sturdy and fine looking aluminum cladding for exteriors if that is called for.

Protective finishes have been developed in our doors to a fine degree. We have continued to use the finest, German made hardware for longevity, security and enjoyment. Finally, we have developed numerous different door systems, such as double doors, pivot doors and door/window combinations. Last but not least, we have developed our craftsmanship so our doors are at the top of the class!

There have been several rigorous field tests to our doors as well. The only door that we know of that was lost, was the Entry Door for a bakery that burned down to the ground.

My favorite survival story was a door we had installed during new construction. There was a plumbing rupture directly overhead, so water drenched the door for an entire weekend. When the break was discovered, and things dried out, only the decorative interior panel of the door was damaged. This was easily replaced. The door itself had not warped even a 32nd of an inch, and is performing perfectly to this day!

It is not unusual for us to hear the heart-warming news from a new owner about one of our doors, “the Schiavone entry door is one of our favorite parts of the entire home!”