The Future for Windows and Doors 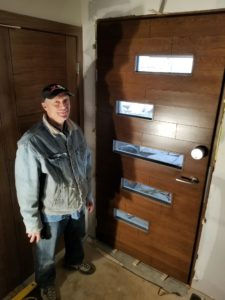 In our last blog, I discussed the financial validity for choosing high-quality doors and windows. Briefly, the upshot of that discussion was that, yes, you would be spending more money, but only 3% more of an over-all construction cost, and the benefits are many. Among the benefits are much warmer and more air-tight fenestration, much longer lasting, and much more satisfying to own than conventional doors and windows. Our Tilt and Turn windows with the stand-off aluminum cladding, the overlay entry door with the double seal, the Lift and Slide door with the threshold and other parts designed for best thermal performance, and finally the Slide and Fold door, also with the best thermal performance for that kind of door, are state of the art European systems, that really work in every kind of climate, and every kind of weather.

This week, I want to discuss why I feel these door and window systems are also the systems of the future.

I began cabinet making 30 years ago, and while the European 32 mm cabinet system had been introduced in the United States, it was not yet common. The 32 mm cabinet system is a system developed in Europe, for maximizing efficiency in cabinet construction. It uses machines that are designed to line-bore a series of holes, a specific distance from the edge of the cabinet box, and specific distances apart. So while the cabinet box is still in pieces, a machine that has multiple boring bits is used to drill a line of holes close to the leading edge of the cabinet side. A corresponding set of holes is drilled in the back of the same piece, so you have a series of holes that are parallel to each other that serve several functions.

The holes are 32 millimeters apart from each other, and can be used several ways: Shelf pins can simply be inserted in the holes to carry shelves. Hinges are built with fastening screws in the hinges also at the 32mm spacing, so that a hinge fits neatly into two holes. These hinges in turn will carry the cabinet door. Finally, the drilled series of holes in both the front and back of the cabinet sides will hold drawer slides which in turn are also built to fit into the 32 mm spaced holes.

The system requires that boxes be uniform, yet is still versatile enough to be able to make any size cabinet, never giving up on the practicality of a systemized cabinet.

A specialized machine is used to bore the line of holes, and not unexpectedly, the machine is called a Line Boring Machine, or more accurately, a 32 mm line boring machine. There are a series of drill bits, called an aggregate of drill bits that are driven by a single motor. When the motor is on, all the drill bits are spinning. If all the drill bits spun the same direction, than any work piece that you would put down in the machine, would spin off in one direction, because of the torque off the bits. Instead these machines are designed to have every other drill bit spin one way, and the ones between the opposite direction. So you have both Left and Right spinning bits, to keep everything stable and working well.

The line boring machine is driven pneumatically, which means by air. In our shop, we have several air compressors, which provide clean volumes of air to our machines. Almost all of our machines use some form of compressed air. The compressor sucks air in to an intake valve, and puts it into a tank. A combustion motor with a piston, takes the air, and compacts it into a big steel drum, until the air inside of the drum reaches around 150 lbs of pressure. This pressure is then sent out along air lines to the machines. The 150 lbs of air pressure in the lines, will drive clamps down upon the work piece for example, to keep the work from moving, or it may drive the drill aggregate in a certain direction in order to perform the drilling.

Incidentally, in the discussion of this line boring machine, we use this same machine in the fabrication of our doors and windows. The machine allows us to change out bits from the 5mm bits we use in cabinet construction, to the 12mm bits we use in drilling and assembling our fantastic entry doors, the lift and slide and slide and fold doors, and our fixed windows as well.

In addition to the myriad of ways to make cabinets, the cabinets themselves were inefficient. The cabinets were made with face frames, which are wide pieces of wood attached to the boxes, surrounding the openings, that wasted space, and made cabinet interior impossible to clean. Hinges were randomly placed, with a cabinet maker needing to measure each hinge placement. Hinges themselves were poorly designed; low quality engineering and function, to compliment the low functioning cabinetry. Drawer slides were even worse. Much worse in fact, as they were difficult to place in the cabinetry, and succumbed easily to wear and tear.

As I said, this cumbersome state of affairs regarding American cabinetry was the status quo when I began my woodworking career. But the neat European 32mm cabinet building system had made its introduction.

Today the 32mm system dominates (I am guessing) 97% of the market. Some cabinetry is still made the traditional American way, but that is on purpose, as a retrofit, or as some kind of historical memento.

My point addresses the woodworking trade in general: 30 years ago, an old system was still widely in use. Now that system is going the way of the remodel refuse containers. The new system has been adopted all across North America, and throughout the world.

So it is going to go with doors and windows as well.

Let’s start with doors. American Doors have three distinct disadvantages, all of them correctible, but after decades the corrections are not being made.

The first disadvantage: The standard thickness for an American entry door is 1 and 3/4″ thick. That is not a very thick door. A door like that can be kicked or smashed in quite easily. A thin door is also not much for keeping cold out. Imagine a blizzard going on outside of the home, and at the entry, a thin slab of wood is resisting that wind and cold. Most standard doors have inserted panels, which are even thinner. So now your already thin door is even thinner. The doorway is going to be a lot of cold (or heat) penetration during times of large inside/outside temperature differences.

The second disadvantage: The standard American door is equipped with a floor sweep along the bottom edge of the door. This is usually a deteriorating strip of material that is somehow fastened to the bottom of the door, meant to slow the penetration of ice and wind. The floor sweep never works for long. The repeated movement of the sweep over the threshold, either damages the sweep, or displaces it so that it is no longer is a sweep but a seep. The door is in no way air-tight, and the lack of a seal is the number one contributor in allowing a temperature exchange with the outside. A massive amount of energy loss throughout the country can be attributed to the disfunctional floor sweep.

The third disadvantage: Leaf hinges. Leaf hinges are the standard way that American doors are hung. Every carpenter that has hung doors, knows that the hinges are not very adjustable. They are either not adjustable at all, unless paper shims are inserted behind the hinges, or they have some kind of complicated adjustment system that also goes out of adjustment, often ceasing to function altogether. It takes a highly skilled door hanger to hang a door with standard hinges properly. It is a lot of trial and error, and usually requires years of experience to hang a door well.

Although the American public has gotten used to bad window design, and even find certain advantages to that design, that doesn’t preclude the argument that the window is designed for failure.

If we look at two of the most popular window designs in American homes, they are the traditional double-hung, and the out swing casement windows.

The double hung window slides up and down, so that it can be opened by sliding one half of the window one direction, and closed when both panels span the opening of the window. Two problems here: the first is that it is virtually impossible to get a good seal between the two panels, and still have them operate. Double hungs are notoriously the worst leakers of windows. Secondly, the view from the window is broken by the bottom and top rails of the window, which intersect exactly in the center of the opening. Instead of gazing in wonder at the beauty beyond, you are looking at a couple of chunks of wood. A little rain and weather on your double hung, and they cease to function without a pry bar and a large quantity of good humor.

The out swing casement is destined for failure the moment they go in. I have looked at entire apartment buildings with hundreds of out swing casement windows, all failed. They fail simply because they swing to the outside, into the weather. So if a casement like this is opened, and is left open during a storm, water damages both the sash (the operable part of the window) and the hardware. In a few years, warping due to weather can make these window inoperable. In the winter, because of movement in the sash, these windows cease to seal as another byproduct.

What do our windows do? They have a stand-off cladding with an air space between the aluminum cladding and the wooden portion of the window. This dissipates heat and cold on the outside of the window. They have a triple gasket seal, that is pulled nice and tight, once the hardware is engaged, for a 100% water and air-tight seal. They either tilt towards the interior to ventilate, or swing open towards the inside for glass cleaning or home freshening. They are designed to withstand the ravages of sun and nature, and they are designed to be beautiful and to last.

So back to the point of this article, which is the question, what is the future of doors and windows in this country? It is simply the type of doors that we have been making for 30 years. American door systems are going to improve along the lines that we have already proven. In the long run, higher functioning systems will replace faulty ones. Like the woodwork that has steadily been replaced by well designed and logical cabinetry, so will it be for doors and windows.

I imagine in another 30 years, many more, if not all companies will be making doors and windows the way we do.

Have a great day!